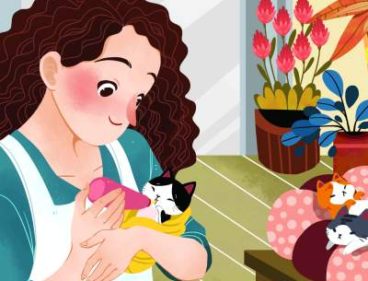 A few of you dear, caring readers have expressed concern over the fate of Lizzie’s mother in Dizzy Lizzie. And rightly so.

So here’s the scoop. My friend Amy, aka The Bottle Woman in Dizzy Lizzie, is an animal rescue advocate. Thankfully, Amy was visiting her boyfriend, a construction manager, at a house site that was being demolished. She saw a feral cat race away from the wreckage. Then they heard cries and discovered the recently newborn kittens under the house. Amy searched the neighborhood, hoping to rescue the mother cat too, but sadly, she kept bolting away, until Amy could no longer find her. She also left food for her near the construction site, but given the high level of noise and activity, Amy couldn’t find her in the following weeks either. Otherwise she would have attempted to catch and re-home her, as this article points out is the kindest thing to do for even “hard to catch cats.”

As many of you know, catching feral cats can be tricky. Not all feral cats of course – some make it perfectly clear they’d love to be adopted – but many can be wary of humans, especially if they’ve been mistreated. Once, I was able to befriend a feral cat, but it took months of working to gain his trust through feeding him, speaking sweetly, acting in gentle ways, and eventually coaxing him to let me brush him. It was a major victory when he finally came to trust me. One day my neighbor walked by, as I brushed Cocoa, and exclaimed in shock, “I never thought I’d live to see this day!” The formerly skittish, skin and bones cat that scrambled away whenever a human came near, had transformed into a handsome, filled-out kitty, purring with contentment.

From that experience, and many others, I concluded that cats love attention and affection as much as they love food! But I digress. Thanks to the caring and heroic efforts of Amy, she found loving homes for all the kittens. And I was fortunate enough to adopt Lizzie and Kimba and live happily ever after with my playful furballs. So the story is indeed bittersweet, but life can be that way. As one of you wise reviewers mentioned.