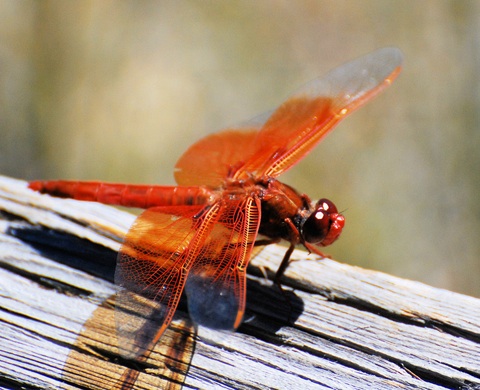 I am blessed to live on the edge of a forest, with creatures great and small. Not only do I find myself greeted on my hikes by a pair of kissing ravens, or our local unicorn – a white stag with fuzzy antlers, or the even more rare citing of a bear, but even tiny critters that get passed over for big show-stoppers

One day, as my seven year old stepson and I played by the creek, we were surrounded by dragonflies and “DRAGONHOPPERS” – that’s what he likes to call those grasshoppers that fly through the air like a butterfly. We were building “train tracks” from river rocks, and one dragonfly landed so close, it was if s/he were watching us on Animal Planet.

Less than an arm’s length away, this neon orange Dragonfly and his/her big pumpkin eyes seemed glued on us. No matter that we were like giants, piling rocks or letting them splash in the water, that little dragonfly sat calmly, like some couch potato for at least a half-hour.

When s/he finally flew off, my little one said just as normal as pie, “the dragonhopper said “the show is over!”